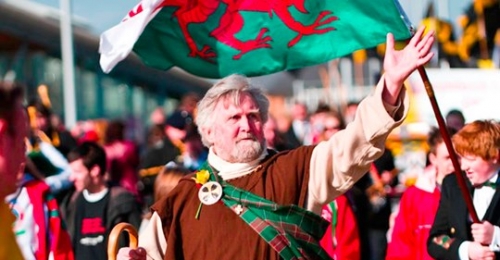 We’re not allowed to have a bank holiday for St David’s Day because Westminster deems it so.

This is just one of a litany of indignities inflicted by the Westminster elite on Wales, and it may seem like a relatively trivial one.

You could argue that it’s just a bank holiday after all. But I would contend it tells us something rather important about how Wales is treated.

St David’s Day is when we celebrate the patron saint of Wales. I’m not religious in the slightest, but I do see it as a significant day nonetheless, as an expression of Welsh identity and a way of bringing us together as a nation. It is a way of affirming our common bond, and all that good stuff.

I am also rather fond of David’s motto “Gwnewch y pethau bychain”, which means ‘do the small things’. The small things matter, because they very often tell a bigger story. A small act of kindness, an act that displays thoughtfulness and generosity of spirit, can be the difference between someone having a good and a bad day. Small acts of kindness also accumulate if done often enough. They can be transformative. After all, if we cannot even get the small things right, it does not bode well for the big ones.

Team Sky, as it was known, embodied the philosophy of marginal gains, and this led to it dominating the Tour de France. It included eating the right food, and even having the right pillows on their beds. The success of our very own Welsh hero, Tour de France winner Geraint Thomas, is an expression of this philosophy.

Unfortunately, Wales is a country that has had marginal losses and more inflicted upon it by Westminster for a very long time indeed. So, the bank holiday may seem like something small, but it tells us something important.

It is quite something when a nation is not allowed to have one day to express its identity. Just think about how ridiculously unfair that is for a moment. How little regard they must have for us. The low esteem with which we’re held is palpable.

If they’re not willing to grant something as small and eminently reasonable as a bank holiday, is it any wonder that they’re unwilling to invest sufficiently in our infrastructure.

Whenever Westminster refuses to give Wales a bank holiday to celebrate St David’s Day, or refuses to devolve the power for it to bring it about itself, I am reminded of the myriad of ways in Welsh identity is marginalised by the British state. Our national anthem is not played at the Olympics, nor our flag flown. There is no representation of Wales on our currency. My passport does not say that I am a citizen of Wales. We in Wales are treated as if we do not exist.

This pervasive elision of Welsh identity is illustrative of the profoundly unequal power dynamic within the UK, and the lack of respect with which Wales is treated. This has profound implications for the people of Wales. Wales is one of the poorest countries in Europe. We are even poorer than Latvia. Child poverty is at around 30 per cent. We have the highest rate of imprisonment in western Europe.

Not only is Westminster not sorting this stuff out; it can’t even sort out a bloody bank holiday. Westminster won’t even do the small things for us, let alone the big things. This is not exactly in keeping with the spirit of St David.

To prevent Wales from having a bank holiday to celebrate St David’s Day is an act of extraordinary pettiness. Whether Wales has one or not should not be up to a bunch of bureaucrats or politicians in Westminster. It should be a decision for us and us alone.

We need to take control of our bank holidays, and much more besides.