A typeface has been created for the Welsh language which celebrate the country’s heritage.

The fonts have been designed by the Cardiff office of design studio Smörgåsbord, in collaboration with the Colophon Foundry. Graphic designer Joseph Burrin also consulted.

The three fonts that make up the Cymru Wales typeface are Cymru Wales Sans (originally created in 2017), Cymru Wales Serif and Cymru Sans Transport, which is used for Transport for Wales (TfW).

Welsh is one of the oldest living languages in Europe, but only 29.8% of the country’s population are able to speak it. This is the first time that the Welsh alphabet has been translated into a digital typeface. It is part of a wider ambition for the Welsh Government’s plans to have 1m Welsh speakers by 2050.

The typeface is part of the Wales Nation brand, and has been commissioned by the Welsh government.

The aim for the project was to create “contemporary European typefaces with a unique personality and a ‘sense of place’ baked in”, according to Smörgåsbord. The studio designed during the country’s identity branding – including the original Cymru Wales Serif typeface – two years ago. That place branding showcased a “painterly” red dragon.

During the research period, the studio looked at “Welsh typographical heritage”, such as the Black Book of Carmarthen (thought to be the earliest surviving manuscript written purely in Welsh) and the Red Book of Gerfest, a 13th century manuscript also written in Welsh.

The studio also looked to other languages such as Icelandic and Arabic for inspiration, owing to their “exuberant and cursive character forms”. Smörgåsbord also looked to the tradition of stone letter carving in Wales. However, the studio was careful not to “wander into the territory of pastiche or parody”.

There were language-specific considerations involved in designing these new typefaces. The Welsh language has eight digraphs, a pairing of two letters that represents one sound. The curved ‘d’ character also became a “cornerstone” of both the Serif and Sans versions.

Since the introduction of the original typeface two years ago, Smörgåsbord said that it became “obvious” that a wider range was needed. Cymru Wales Serif is designed for “longer, editorial reads”, and can be used in collaboration with the original Sans font.

A third font, Cymru Sans Transport, has been created for TfW. It is all-caps and based on CW Sans, and does not contain any of the digraphs. The letters are stencilled in a “utilitarian manner”, which is also a nod to TfW’s ‘T’ roundel. 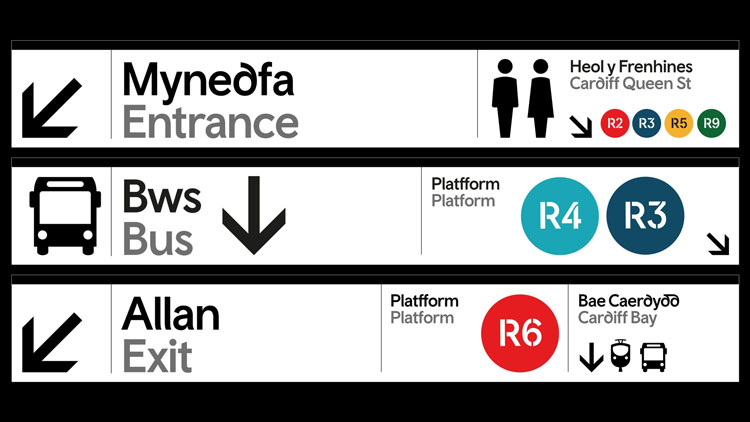 Different sectors of the Welsh government target different audiences. To meet these needs, the studio assigned different weights and cuts of the fonts for each of the sectors. The Trade & Invest sector uses the Sans typeface in uppercase. Tourism, meanwhile, needed something more “approachable and informal graphic language” and uses Sans Medium in sentence case.

Creative Wales, a new agency within the government that promotes growth in the creative industries, uses a “slithered” version of the Serif typeface.