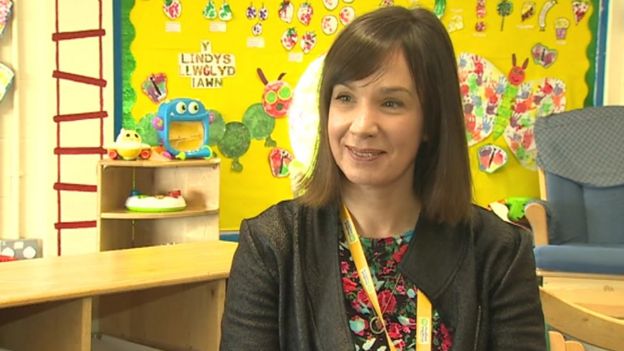 A scheme to help preschool children learn Welsh more quickly is being rolled out across the country.

Croesi'r Bont, or Crossing the Bridge, has been developed by Mudiad Meithrin, which runs most Welsh-medium early years provision.

The focus is on ensuring staff at playgroups and primary school teachers use the same language patterns.

The aim is to ease the transition into Welsh-medium education for children whose families do not speak Welsh.

The group's leader Elin Williams said: "95% of the children here are from homes where Welsh isn't spoken.

"If parents find that the children don't cope with the language, they take them to English-medium schools in the community here.

"But with Croesi'r Bont, we find that the parents are surprised at just how much Welsh the children have learned in a single year at the playgroup."

Mudiad Meithrin has been given funding to open 150 new playgroups by 2027, as part of the Welsh Government's vision of one million Welsh speakers by 2050.

Chief executive Gwenllian Lansdown Davies said the ambition could be realised if there was joined-up thinking between councils, colleges and other bodies on training.

Mudiad Meithrin is taking a key role in the Welsh Government's aim of one million Welsh speakers by 2050.