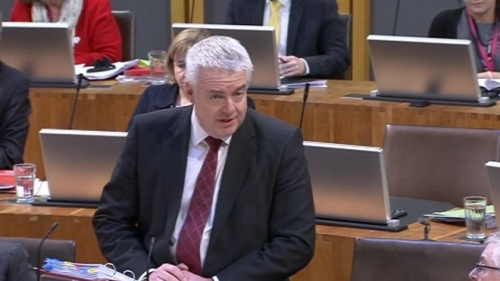 People need to be persuaded to speak Welsh, not forced, the first minister has said, after his government was urged to set a better example.

Cymdeithas yr Iaith Gymraeg said just 12% of assembly debate since May 2016 election had been in Welsh.

Carwyn Jones told BBC Radio Cymru he thought a question should be answered in the language it was asked.

He said most voters in his Bridgend seat did not speak Welsh and he needed to communicate directly with them.

Cymdeithas based its claim on a count of the number of words spoken in Welsh and English during plenary sessions in the main assembly chamber, taken from the official record of proceedings.

It praised Plaid Cymru AM Sian Gwenllian for using the language 99% of the time, and her Plaid colleague Elin Jones - the presiding officer - using it 84% of the time.